The Railway Children: Peter writes to his father

Writing from  Year 6 'Bubble 1' Based around the core text, The Railway Children,  some pupils have published a letter from Peter to his father.

How are you? It is Peter here- your one and only son! We can’t even acknowledge how much we all miss you since you have gone. Why did you have to leave? Also, as you know, Phil is always in a mess and she always breaks things! She broke my favourite toy and I need you to fix it! Mother has been feeling melancholic as we all were when you left; but we are keeping mother up on her feet.

Once you left, mother made a sudden decision to move out. It was a long week of packing ugly items that was in our house. It was like a furniture warehouse; it was so much fun. When we were done packing, mother and Aunt Emma slept in the two spare rooms whilst we slept on the drawing room sofa. The next morning, boxes were all filled and we got an afternoon cab to the station. When our train came, we hopped on it and we were staring at the window but then we got sleepy and we fell asleep. Once we woke up at the stop we were feeling disorientated and cold. We were shivering on the draughty platform. We were wishing for the walk not to be long. Also whilst we were walking my nose was so cold.  I never thought it could be this cold. I thought if it was this cold it would fall off!

Once we found the house, it was really dark inside so we lighted a candle so we could see and there were rats in the walls and on the floor. We tried to prepare supper but it was too dark to find any cupboard.  Luckily, we had our cases of food that Emma packed for us but it was really hard to open it. You would open it easily but you weren’t there. The next morning, we ate the dinner yesterday for breakfast, went to a water pump and took a shower with that.

In the country it is very hilly.  While we were walking about, we found a railway.  I have never been closer to a train ever in my life. It was like a dragon tearing by and it was the most ripping sport. Also at the train station, there was a person called a porter that kept the coal safe. They put a line at the brim of the coal so if anyone takes it they will know.

We are starting to settle in without you but that doesn’t mean we miss you any less. Mother is always in her room writing stories so we got accustomed to not seeing her also. We hope you will come soon!

How are you? It is Peter, your favourite son! Where have you been since you left for London? I miss your clever fingers and how you fix things because Phil keeps on breaking things and now we need you father. Why did you go away? Mother has locked herself up in the room.  We are trying our best to help mother out.

Father, did you know mother told us that we had to move to the countryside?  Our new home is called the Three Chimneys. The packing took over a week to do. If you were there, it would have been easier for our family. Aunt Emma helped us to pack and we were having fun and enjoying the whole experience. When we got off the station near our new home, we were all shivering from the cold and felling very melancholic. Unfortunately, there was no taxi for us which made things even more worst. When we got to the Three Chimneys, we had to ask someone for the key. Why did you leave? Everything would be much better if you were here with us. This journey could have been more relaxed but it turned out to be the other way round.

Everyone got scared of the rats in the house!  It was dark and we had to use a candle. For dinner, we had sardines, preserved ginger, cooked raisins, candied peel and marmalade that Aunt Emma had packed for us.

The next day, we found a stable behind the house which we did not know about. We went to find the garden but we took so many circles around the house until we finally found it.  Father, we would find the stable that which was behind the house much quicker.  However, the most exciting thing we found near our new home is a train station and a train railway tunnel.  When we took a closer look at the railway lines, a train came out of the tunnel like a great dragon tearing.  We were so close this time. The train rushed through the tunnel with a shirk and a snort.

I have not seen you for many days, but I keep of thinking of you father and miss you. Mother now stays in her room writing stories and then at lunch comes down and tell them to us and she is always busy after you have gone. Why father? Why did you have to go away?

From your only son, Peter

How are you? It is Peter here, your favourite son! Mother is busy in her room writing and reading to us. We all miss you very much and feeling very melancholic. Why did you leave and go to London? When would you be returning? As you know Phil is incredibly clumsy and keeps on breaking things in the house so we need your incredible fingers to fix the mess Phil has made.

Father, did you know that we had to move to a house called the Three Chimneys? We were very busy because we were packing for over a week. We packed clothes, crockery, pans, chairs and tables. We all loved the train journey but all of us shivered on the platform when we arrived.

After we left the train, we walked to our new home because there were no cabs. When we arrived, we could not find the key to the house but soon it when a kind gentleman helped us. At first, the new house was dreadful because of all the rats roaming around. We cleaned the place up hastily but could not find the dinner.  Thankfully, Aunt Emma packed us marmalade and sardines.

The next morning. breakfast felt like dinner because we had pie for breakfast after we finally found the room our dinner was in the night before. Mother told me where the garden was. We woke up early to help her unpack.

Phil, Bobbie, and I were super excited because we went to see the train. It came out of the tunnel with a shriek and a snort like a dragon’s lair.  I never thought we should ever get as near to a train as this. It’s the most ripping sport! We wondered if the train was going to London so we went to the train station to find out.

Phil, Bobbie, and I are enjoying the new house in the countryside. We have got used to not seeing you Father but we are still missing you dearly. 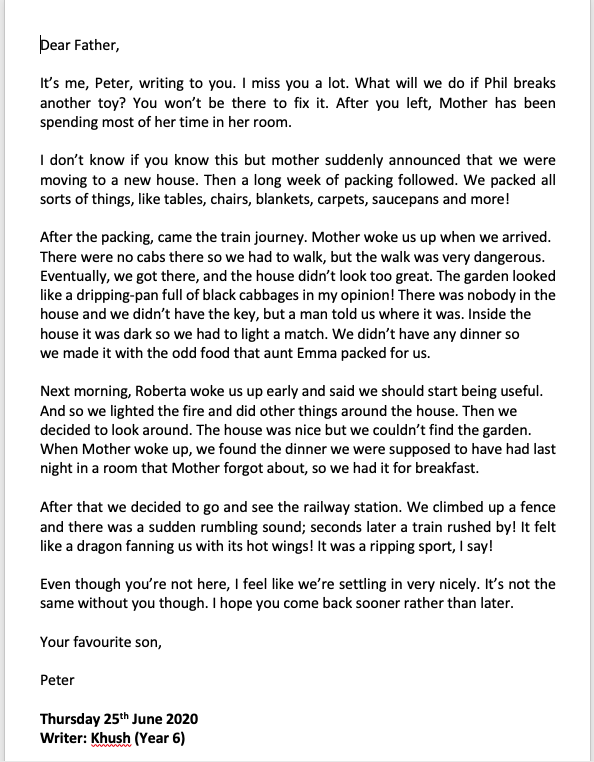 How are you? It is your favourite son here, Peter! Words cannot describe how much the family miss you. Why did you leave us? Mother has suddenly changed since you left. She has become so depressed and melancholic. She stays in her room all day and we all try our best to cheer her up. As you know, Phyllis keeps breaking things around the house and there is no-one we know with your clever fingers to fix them.

We all suddenly had to move away. It was such a busy week of packing but me, Roberta and Phyllis enjoyed it. We had to pack clothes, crockery, tables and chairs. It was so busy and chaotic but we had Aunt Emma to help us. To get there we had to go on a train journey. It was so amazing and cool how the engine worked. I wish you were there to see it.

However, it was cold and windy when we got off the train. There were no cabs so we had to walk all the way there. When we arrived at the house the garden looked like a dripping-pan full of black cabbages. There was no light in any of the windows. We also struggled to find the key until someone came to help us. When we stepped inside the house it was cold and you could hear and see the rats in the house. We were so scared!

The next morning, we decided to do something nice for mother. We put the fire up and unpacked the rest of our things, made the table and breakfast it was so fun to do something nice for mother. After we went outside to look for the garden but all we found were the stables in the back and an outbuilding. In an instant we saw the train passing by. There were tunnels and bridges with arches.

Then we went to the railway so we could see the trains up close. We saw a train come out of a tunnel with a shriek and a snort. It was like a great dragon tearing by and it fanned us with its hot wings and the tunnel from outside was like the dragon’s lair. It was so fascinating. I have never seen a train this close before. Then we went to a train station and we met a porter and he told us all about how they mark the coal so they know if anyone tries to take it.

Father, do you know when you put your hand in a delicious cake and it leaves a dent or if your hand is dirty it leaves a black mark? That is how much we miss you father. I hope you will be returning soon.