Should Peter have been found guilty for stealing coal? Read these discussion pieces and decide for yourself

Some children in the Year 6 'Bubble 1' chose to write a discussion piece on whether Peter should have been found guilty for stealing coal. They are reading the Railway Children as their core text. 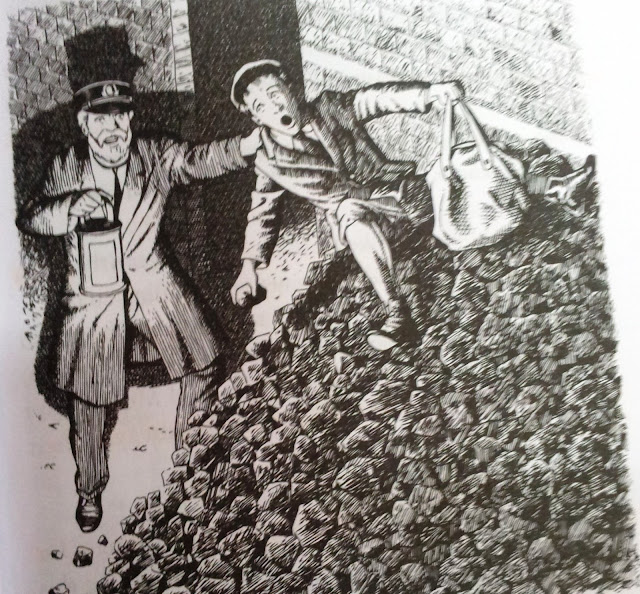 Should Peter be found guilty for taking coal?

Most people understand that taking something that does not belong to them is considered stealing. In a book called The Railway Children, Peter (who is ten-years-old) is put in a situation where he takes something without asking anyone. However, he just wanted to help out his family. Was it a right choice to make?

Guilty:
The first reason why Peter should be guilty is that the train master bought the coal with his own money and if you take something from the shops without paying for it that is considered stealing, just like what Peter has done. Surely he should know by now, as he is 10 years old.

Surely you should know that Peter has been warned when he was first at the railway station as he was talking to a porter about it. The porter has told Peter that they mark the coal so if someone would take it they would notice, but Peter being Peter did not listen and took the coal.

Not Guilty:
On the other hand, all Peter wanted to do was to provide his family with a warm house as they are poor now and did not have much money. Surely you would not want them to be cold and get ill. All he wanted to do was help. Peter did not know that taking a bit of coal was considered stealing.

In addition, if the train master did not catch Peter taking some coal, he wouldn’t have noticed as there was plenty of coal and it would not make a difference if Peter have taken a bit of it. It would take so long to use the coal so if he took some of it, it would be fine.

You probably don’t know, but Peter loves to role play so how do you know that Peter was going to take it home? He might have been role playing because his sisters were there and he also said that he was coal mining. Peter wouldn’t have done it if he had known it was wrong.

In conclusion I believe that he isn’t guilty because Peter didn’t actually leave the building with the coal so that means he didn’t take any of the coal home. What do you think?  Do you think Peter is guilty?

Moving on, Peter had received a good education at school. Surely he was told that stealing is wrong. Also they should have spoken to Peter about the consequences of taking someone else’s belongings. As a ten-year-old boy, he is able to understand that it was not the right choice to make.

On the flipside, Peter was really trying to do a good deed for his family. Peter’s family has become a lot poorer and couldn’t afford fires like they used to be able to.  Peter only intended to provide his family with a warm house. Also it was all a game in his eyes since he had a massive imagination and often made up his own fantasy worlds.

Furthermore, Peter didn’t really take the coal as he didn’t leave the building with it Peter’s family should be able to have a warm house. You do understand that Peter was really just trying to do a good thing, right?

Having viewed both sides, I believe Peter is not guilty and should be let off just this once. A fair punishment would be not be allowed to go back to the train station for a week. His siblings, however, will be allowed because they didn’t really take part in the situation.

Guilty:
First of all, days before Peter’s ‘crime’, a Porter warned him that if he tried to steal the coal he would be caught. Peter being 10 years old should have known to take that warning seriously. As witnesses can agree, the Station Master said ‘Stealing is stealing and what’s mine isn’t yours even if you say it isn’t ’.

Moreover, most people would agree that at school they are taught at least once that stealing is a crime and if you do it and get caught, there would be consequences. Peter, coming from a wealthy family, surely has learnt that taking something that doesn’t belong to you is considered breaking the law. Peter is constantly ignoring his warnings and for that reason he should be punished.

Lastly, Peter has 2 sisters- Roberta and Phyllis. Roberta is the oldest- and as the oldest she should have been a better influence and told him not to commit a crime. Instead, Roberta and her younger sister, Phyllis hid in a bush giggling at him. It wasn’t until later when they decided that they should help Peter carry the coal to come forward. This means they were involved in the crime and should also be punished.

Not guilty:
On the flipside, Peter never said that he was going to steal the coal. His sisters and mother would agree that Peter had a great passion for roleplaying as a bandit. So maybe Peter ‘taking the coal’ was just that, a role-play. You cannot punish him unless you have solid proof that he left the building with the coal. Which leads me to my next point.

Furthermore, Peter never left the building with the coal. So no one can agree or deny that he was there just to play. This means you cannot punish him just yet. If Peter left the building with the coal, that would be a different story. I can understand that he’s supposed to know better. However, what if he did not know? I strongly believe that if he knew it was wrong he would not have done this.

Lastly, Peter’s family did admit that they are now poor. Peter, being the only boy in the house, wanted to step up and try to do a good deed. He said ‘I was only trying to help my family’. Surely you wouldn’t want his family to be cold, would you?

In conclusion, after considering both sides, I think Peter is innocent because he only meant good intentions. However, he should be punished by working at the station so that he understands that what he did was wrong. I also think he should keep the coal to help his family so that they can keep warm on rainy days.