How many did you get right?

1. Grape vine
2. Strawberries
3. Broad beans - these don't grow tall, it is runner beans that climb up high. Remember Jack and the Beanstalk?
4. Rhubarb
5. Raspberries (there's some gooseberries, blackcurrants and red currants hidden in there too)
6. Garlic and cabbages
7. Wallflower
8. Iris
9. Allium
10. Fuschia
11. Antirrhinum - know as a 'snap dragon' because its flower looks like a dragon's face and when you squeeze the sides the 'jaws' snap open.
12. Tulip - tulips originally came from Turkey and when they reached Holland there was a mania for them. The price went higher and higher before collapsing. This one cost 10 years' wages! 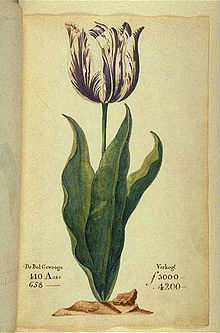 A tulip, known as "the Viceroy" (viseroij), displayed in the 1637 Dutch catalog Verzameling van een Meenigte Tulipaanen. Its bulb was offered for sale for between 3,000 and 4,200 guilders (florins) depending on weight (gewooge). A skilled craftsworker at the time earned about 300 guilders a year.

Parents and carers, you can share your child's writing on this blog with friends and relations by email clicking on the envelope symbol at the bottom of the post.

Chalkhill Primary School is in Wembley,England, famous for its national stadium. 84% of the children are learning English as an additional language. 46 languages are spoken across the school with Arabic and Somali the largest groups. Many of the children start and leave the school at ages other than the statutory 5 and 11. There are children beyond the age of 5 who have never been to school before. Some of the writing published here will be from older children at the early stages of learning English. School Website

This informative book is suitable for older children CLICK HERE

Type your name here to find your writing